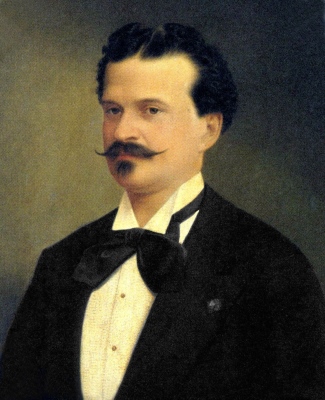 The third son of Johann Strauss the Elder, Eduard, was born on 15 March 1835 in Vienna. Originally commencing employment in the diplomatic service, he also studied musical theory. He became a harpist in the Strauss orchestra in 1855. In 1862, he joined his two brothers as a fully-fledged conductor of the family orchestra. On the death of Josef in 1870, Eduard took over the management of the Strauss family orchestra entirely, a task which he performed diligently until he disbanded the orchestra in 1901.

Like his two brothers, his musical output was prolific, writing over 320 separate orchestral dances and marches. Apart from the exuberant Bahn Frei! (Track Clear, 1869) and a handful of other fast polkas (he always excelled in this particular dance form), his music is not as well known as that of his brothers. However, by 2001, over 50 of his works had been recorded on compact disc.

He married in 1863 and from the union came two sons, Johann Maria Eduard (born 1866) and Josef Eduard Anna (born 1868), the first of whom followed in the family tradition. In 1907, Eduard committed the entire family archive to be incinerated. Eduard Strauss I died in Vienna on 28 December 1916 at the age of 81.