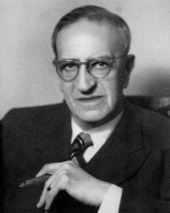 Oscar Straus – no relation to the Waltz King – was born in Vienna into a prosperous Jewish family. His father was a banker. An early impression on the young Oscar was a visit to the D'Oyly Carte production of Gilbert and Sullivan's The Mikado when it was performed at the Carltheater in Vienna in 1886. Early musical studies were with Max Bruch in Berlin where Oscar became friends with Leo Fall. Whilst in Berlin he conducted and played the piano, but he also started to compose operettas. After a few minor successes he found great fame in 1907 with Ein Walzertraum (A Waltz Dream). Not only was it extremely popular in Vienna but it also had a run of 136 performances in London in 1908 at the Hicks Theatre. Another success was The Chocolate Soldier. Straus wrote over 40 works for the stage and about 500 other compositions including cabaret songs, chamber music, orchestral and piano pieces and some choral works. He also composed music for film scores