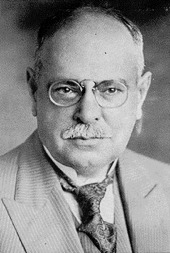 Sousa the 'March King' - Johann Strauss the 'Waltz King', and there the similarities more or less end. But his marches were and still are popular in Austria and he was the only American composer to leave his mark in Europe against the competition from the many Austrian military band composers. But Sousa also wrote operetta, including waltzes, suites and songs which puts him exceptionally in the camp of composers of lovers of Viennese music and though his style was different, he used similar construction. Another genius, at 6 he was already showing talent and at 11 years organised his own quadrille orchestra of grown men. He studied under Benkart who had been trained by the renowned Simon Sechter in Vienna, thus receiving a musical background otherwise not available in America at the time. He played the violin in a well-respected quartet in Washington who imported their music from Europe. He played for Offenbach at the 1876 Centennial Exposition in Philadelphia and then led various theatre orchestras. At the age of 25 he became director of the United States Marine Band, which started his 52 years as a bandmaster. But he never lost his theatrical links and he composed 15 operettas, the most famous of which was El Capitan in 1895. He was one of the first American born composers of operetta. Only Gustave Kerker and Victor Herbert had an operetta performed before Sousa. He set up his own band in 1892 and toured both America and Europe, including Vienna. Much of his output was scored both for wind band and symphony orchestra. All his marches have been recorded, along with some of his waltzes and operettas.