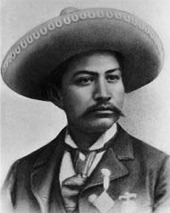 The short life of this Mexican musical genius was a great loss to music. The fact that he was able to produce such melodic music only raises the question of how much more he might have composed. Known today mainly for his waltz Over the Waves often incorrectly attributed to Johann Strauss, of which the maestro himself, had he composed it, might have been justly proud. Rosas was the greatest of the Mexican composers who wrote popular 19th century dance music. The genre was imported from Europe early in the 19th century and was quickly adopted in South American countries where not only waltzes and polkas but mazurkas, scottisches and danzas were more popular for listening rather than for dancing. Taught the violin by his father, Rosas came to Mexico City in 1875 seeking a better life. He started in a trio, and freelanced with other musicians. His talent came to the attention of a wealthy sponsor who sent him to the National Conservatory of Music in Mexico City where he formally studied. But short of money he had to curtail his formal training and travel around to earn a living. In 1888, he composed his most famous work for which he received only a pittance for its publication. The same year, following another attempt to study, he composed his Carmen waltz, which at one time vied in popularity with Over the Waves. This waltz was recorded on our Spirit of Vienna Vol.2. His third most popular composition, Ensueño Seductor was recorded on Contemporaries of the Strauss Family Vol. 2, released in 2015 by Naxos. In 1893 Rosas joined the orchestra Tipica Mexicana that toured America and took part in a musical contest at the Chicago World Fair and won a number of gold medals. It was the same exhibition that Ziehrer and Sousa's Band was also playing daily. Yet another contemporary, Scott Joplin was in Chicago, but he was playing his piano in the surrounding bars.  Rosas then toured the southern American cities with his orchestra before departing from Tampa for Cuba. There, while on tour he fell ill, and at the age of 26 died. In 1939 his remains were reburied at the Rotunda of Illustrious Men in Mexico City. He had composed around 50 compositions, of which 32 of the 33 compositions that remain were recorded on piano on 2 CDs by Nadia Stankovitch in the late 1990s.