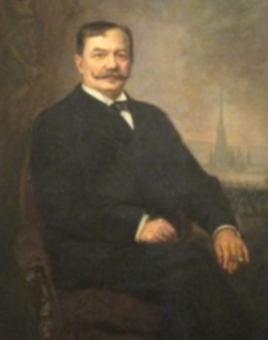 Carl Michael Ziehrer was born in Vienna, the son of a master hatmaker, and a child prodigy at the piano. He was discovered by the famous music publisher Carl Haslinger who was looking for a composer to replace Johann Strauss son, following a financial dispute with the Strauss family.  The outcome was that Ziehrer was sent to study music at the Vienna Conservatory, and Haslinger obtained all publishing rights in return for his further education and promotion. He was launched in grand style at the Dianasaal in 1863 in a clear attempt by Haslinger to upstage Johann Strauss II.

Although Ziehrer was never to become a real threat to the great maestro himself, he came closer than anyone else to challenging the dominance of Johann Strauss II and Eduard Strauss, and like Johann Strauss II moved into operetta later in his life. He toured widely in mainland Europe, in particular Germany, Hungary and Romania, but he did visit other countries. Without exception these tours were a success and he was a constant rival to Eduard Strauss in concert halls and the ballrooms of Vienna.

Ziehrer became a military bandmaster three times during his long career, twice early on for mainly financial reasons, but he still composed a huge number of talented dance pieces. His last, and longest period as a bandmaster came with the famous Hoch-und Deutschmeister Regiment with whom he represented Austria at the Chicago World Fair in 1893 and a tour of North America.

Ziehrer, like Johann Strauss son, started as a composer and conductor for the ballroom and concert hall and his great strength lay in melodic inspiration, and as he matured, he developed his style, often swaggering and highly rhythmic, influenced no doubt by his spells in the military and his music was often more akin to traditional Austrian folk music in melody than Strauss. He was a very down to earth and sympathetic individual, without pretension, had enormous energy, and became extremely popular with the general public.

He composed some 22 stage works up to the outbreak of the First World War, the most well known today being Die Landstreicher, in 1899, Die drei Wünche in 1901, and Der Fremdenführer in 1902. He actually wrote more operetta hit songs than Johann Strauss. Some of his best pieces were arranged from his operettas, such as the waltzes Herrreinspaziert!, In lauschiger Nacht and Samt und Seide to name just three.  Of close to 600 compositions, his best known works are the waltzes Weaner Mad'ln, Wiener Bürger, and Schönfeld March. His Fächer Polonaise introduces almost every Viennese Ball around the world.

After Eduard Strauss he was the last to hold the position of k.k. Hofballmusik-Direktor (Imperial Director of Music for Court Balls) by decree of the Emperor Franz Josef, and so closely witnessed the fall of the Empire, conducting the last ever Imperial Ball. The First World War brought him nothing but misery ill health and poverty.  He died in 1922 and was the last survivor of the so-called composers of the Golden era.

2022 sees the Centenary of his death, and he has become more widely known through the extensive recording of much of his dance and operetta music. There is no doubt that his music is quite infectious, even if he kept to conventional construction. His prediction that ‘One day, my music will receive the public recognition that it deserves’ has mainly come to be, with a huge number of his recordings now available, especially through Naxos (Marco Polo label) and Preiser Records. A detailed list of the Preiser recordings can be found >HERE<, and there is a dropdown list of his works under this tab. 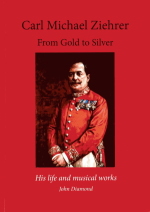 The fully illustrated book "Carl Michael Ziehrer From Gold to Silver" by John Diamond has just been issued in a high quality print publication in English which tells his life story and includes a comprehensive list of appendices that cover all of his works.

The book can be purchased from this website >HERE< On that page, scroll down to "Section 2 - Purchases" and fill-out the details.
The price of the book, including postage, is:
UK: £20, Europe: £27, rest-of-world: £40.