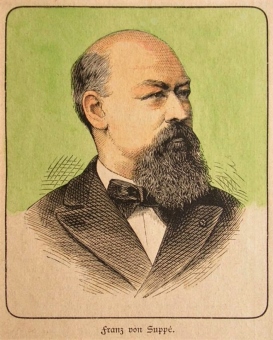 Arguably the most versatile and technically accomplished of all operetta composers, Franz von Suppè was born on 18 April 1819 in the harbour-town of Spalato (now Split, Croatia; Yugoslavia until 1990) in the kingdom of Dalmatia, then an outpost of the vast Austro-Hungarian Empire. The name on his birth-certificate read Francesco Ezechiele Ermenegildo Cavaliere Suppè Demelli. He was the son of a district commissioner of Italian and Belgian ancestry and a Viennese mother of mixed Czech and Polish blood.

Actively discouraged by his father from becoming a musician, Suppè was instead sent to study law at Padua, but in 1835 he moved to Vienna and embarked upon serious musical study. His first theatre post, at the Theater in der Josefstadt (1840), resulted in his highly praised first theatre score, Jung lustig, im Alter traurig (1841). In 1845 he became a conductor at the Theater an der Wien, a position he held for seventeen years. Further conducting appointments took him to the Kai-Theater (1862-65) and the Carltheater (1865-82).

An awesomely prolific composer, Suppè's output numbered some 300-400 works for the stage alone, including Volksstücke (folk-plays), Possen (farces), Märchen (fairy-tales) and ballets. His one-act Das Pensionat (The Finishing School, 1860), written in response to the increasing grip of Offenbach's operettas in the Austrian capital, is generally regarded as the first true Viennese operetta.

Although chiefly remembered today for his many fine and rousing overtures, with their Rossini-like crescendi, Suppè created many noteworthy stage works, amongst the most celebrated being Die schöne Galathée (1865), Zehn Mädchen und kein Mann (1862), Fatinitza (1876), Boccaccio (1879) and Donna Juanita (1880).

In 1881 Franz von Suppè was awarded the Freedom of the City of Vienna, where he died on 21 May 1895, his final years clouded by illness and personal tragedy and the failure of his last few works.