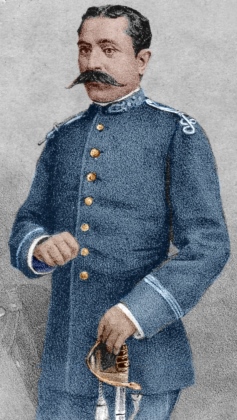 Otherwise known as Josef Ivanovici, the composer was born in 1845 in Timisoara, Romania. He first learned to play the flute given to him as a child by a sympathetic old man and on growing up he enrolled in the 6th Army Regiment based in Galati where he also learned to play the clarinet under Alois Riedl. His gift and passion for music soon led him to become one of the best musicians in his regiment. Encouraged, he continued to study in Iasi under the renowned Emil Lehr, one of the outstanding musicians of the second half of the 19th century. Ivanovici rose to become a bandmaster and toured around Romania. He conducted several different military bands before finally being appointed as Inspector of Military Music in 1900, a position he held until his death in 1902.

Today he is known only for his waltz Waves of the Danube, but he wrote over 350 dance pieces and marches and his works were published by no less than 60 publishing houses around the world. He won the coveted march prize to mark the World Exhibition in Paris in 1889 out of 116 entries by other outstanding composers of the time. Many of his compositions were dedicated to events and notable personalities or events of the time and he did not restrict himself to Romania, dedicating many pieces to other Central European countries. His musical talent put him into the category of the major dance composers of the time and his subsequent obscurity was the result of both the isolation of the country and his ethnic background which put him out of favour with the authorities after his death.

His music is very much is the style of Johann Strauss and his contemporaries, but is strongly influenced by Romania's own musical traditions, which makes it refreshingly different.

Very little music by Ivanovici is available on CD, but click here for details of the CD Waves of the Danube.