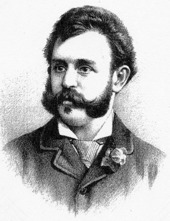 Drescher was another talented Viennese musician who studied singing and then violin under Hellmesberger Sr. and Heissler. He joined Fahrbach Senior's orchestra as lead violinist and later played for the Strauss brothers in their orchestras. Following a short intermission with the military, he set up his own salon orchestra in 1874 and was in demand in Vienna into the next century. He also played in London. Drescher survived the First World War and continued to conduct his orchestra until he retired in 1920. He composed a large number of dance pieces and also made a number of early shellac recordings with his orchestra. A detailed biography of Drescher and his two sons, written by Peter Kemp, appeared in Vienna Music No 97 (Summer 2009).